A customer came up with this idea and I made it a reality for her ash frame and the two ash frames I made for her kids: drawers with removable dividers!  I cut a channel into the bottom, front, and back of a drawer and a piece of plywood (the same stuff from which the drawers are made) slides down into it.  That gives you a drawer with two compartments that can be converted into a single-space drawer just by pulling the divider out.  I can make one or all drawers on a frame have dividers. 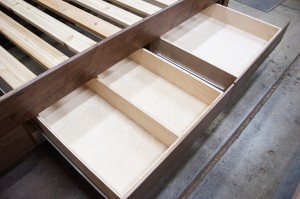 Regular drawer on the right, divided drawer on the left. To make the left drawer have the same kind of space as the right one, you just pull the divider out.

Pretty nice, eh?  Like the night stand spacers (which the walnut frame in the photo to the left has), this is another handy option that can be added to any frame with drawers.

I’ve been asked about making the drawers taller pretty much since I started making them.  I did just that on the aforementioned ash frames.  I need to take photos of the ash queen with deep drawers (and curly cherry stripe!), which is easy since I’m friends with that customer now, but until then, you’ll have to take a gander at the photo of the frame I made for one of her sons: 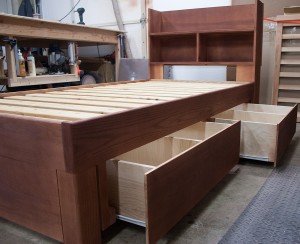 9″ tall drawers and a storage headboard on this ash frame with dark shellac finish.

Both drawers are 9″ tall and have removable center dividers.  The main reason I haven’t made taller drawers before is because most people buy fir frames, and the wood for those comes in 5 1/2″ widths, so making the drawers taller than that would require extra boards and therefore, extra work and cost.  The situation is different with hardwoods, however, because they come in random widths and therefore don’t necessarily have the 5 1/2″ width limitation.  I found 9 1/2″ wide boards for the false fronts for both of these ash twin frames, so I made them taller.  The other reason for not making taller drawers is that they require extra-strong supports, which add time and therefore cost.  I cut mortises (recesses/slots) into the rails and glued the vertical drawer supports into them, which gave the drawer system the extra strength it needed to be up to my high standards.

The abridged version: yes, I can make the drawers on your frame taller, but that does add not-insignificant cost and yes, I can make one or more of your frame’s drawers have compartments, which adds some-but-not-a-lot-more cost.